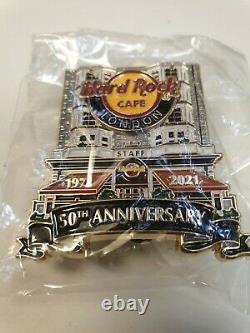 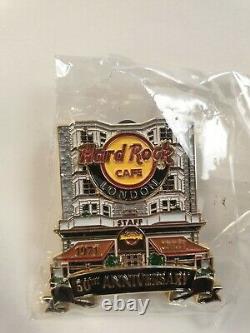 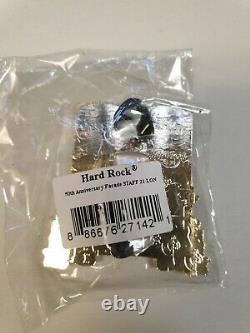 Limited to 100 pieces only produced! Not available at the Hard Rock Shop.

This STAFF pin is of the facade of the first ever Hard Rock Cafe, situated on the corner of Old Park Lane and Piccadilly in London. The Cafe opened on 14 June 1971 and the pin celebrates its fiftieth anniversary and, by extension, the fiftieth anniversary of the Hard Rock Corporation as a whole. A Hard Rock logo is placed in the upper centre of the pin, and a black banner at the bottom of the pin, partly covering the front door and windows, carries the words in gold capitals "50th Anniversary". The back of the pin is silver in appearance with a design of horizontal and vertical guitars crossing at mid necks and interspersed with Hard Rock logos.