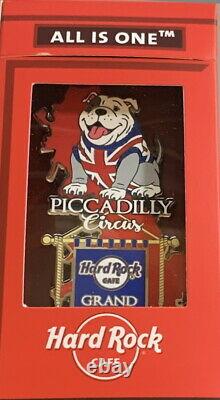 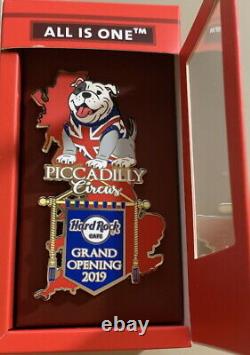 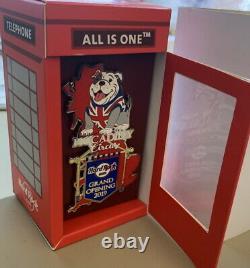 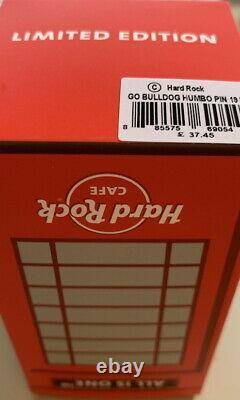 The location, " Piccadilly Circus", is positioned across the middle of the pin, roughly covering across Lancashire and Yorkshire. A navy blue pennant with light yellow hanging thread, bar and side tassels covers most of Wales, the Midlands, South and South West of England. Inside the pennant is a Hard Rock Cafe logo in white with blue wording bordered in white and below the logo are the words "GRAND OPENING 2019". The back is silver in appearance with a design of pairs of guitars arranged head to toe and set at 45 degress, interspersed with Hard Rock Cafe logos. A four line text line includes a top line that reads "Limited Edition 300". A guitar pick shaped hologram incorporating a Hard Rock Cafe logo and the names of various Hard Rock Cafe locations certifies authenticity. Limited Edition of 300 Made! Mint, New Pin is about 3.25" x 1.75". Box 4.75" x 2.5". The item "Hard Rock Cafe LONDON PICCADILLY CIRCUS 2019 GRAND OPENING Jumbo PIN Phone Box" is in sale since Sunday, August 23, 2020. This item is in the category "Entertainment Memorabilia\Music Memorabilia\Rock & Pop\Artists H\Hard Rock Café\Pins".

The seller is "rockyourpinworld" and is located in Orlando, Florida. This item can be shipped worldwide.